I totally forgot to post about this!
Well as you know, last May I had to say good bye to Ucchi.
Ucchi was my sister's cat who came to live with me for 3 weeks before her kidney failed.

Now it was just Ozzy and I.
I could tell Ozzy was bored at home by herself all day, so i thought perhaps I should go and get her a friend.

One Friday afternoon, I went to the Humane Society to have a look. I had read in the papers that they were begging people to come and adopt their cats since they were over crowded (they even had a buy 1 get 1 free deal) but i knew that taking in 2 more cats was a bit borderline.

Well I spent a little over 3 hours there, visiting each cats, spending time with them seeing which one was nice, which one liked to play, which one would fit nicely in my home. I had the idea of going in and getting a kitten.
I was lucky there were 13 kittens to adopt...but after seeing all the people visiting the humane society stopping in to see the kitten, play with them, leaving and ignoring the older cats, I felt bad. Maybe I should adopt an older cat, like we always do. Give them a chance, Kittens don't stay long in those places, but older cats do.

So I spent time with a few of them, first there was Bobby, a big, but very big 8 years old black and white cat. The first time, he came running to me, meowing and rubbing himself on my legs. When I sat down, he jumped on my lap and started purring. The second time I went to see him an hour later, he completly ignored me...I guess it wasn't love at first sight after all.

I then saw this beautiful red long haired cat with a pointy face named Fox. He was all by himself at 11 months old. I sat down and quickly he layed down on my lap and stayed for a good 15 minutes. He was very cuddly and very gentle. But not really playful and I was afraid that if he was by himself in this room, was probably because he didn't get along with other cats.

Then in the last room, there was Malakai. This grey and white 6 years old male. He was really excited to see me and started meowing and rubbing himself agaisnt me. I had seen him with another person a few minutes earlier and he hadn't reacted the same way with them. He got up on his hind legs, so i took him in my arms, where he proceeded at head bumping me and giving me kisses. It was hard to resist.

I went back and forth between Fox and Malakai, I just couldn't make up my mind!! Don't give me that much choices, i can't decide!!!  I took pictures and sent them to my sister who proceeded to say that Malakai was prettier.

After a few hours, I realized that I kept going back to Malakai. He was playful and affectious. And every time I went in his room, he gave me the same welcome. So I went at the front and signed the papers and shed out a few bucks, then by 5pm, I was briging home Malakai....who was now renamed Busan!

Busan is from Kisarazu Cat's eye (same as Ozzy and Ucchi) It is a japanese drama that is hilarous that my sister and I really like. Busan is the leader in the drama, he is a bit hyper and lazy, clumsy and and smart. Living his life to the fullest (because he is dying of cancer in the drama)...and I though "Malakai" was just like that.


So now it has been 3 weeks since Busan is living with me and Ozzy. He is a pest!!! but i love him.  His play time is usually between 1am to 5am and normally i wake up to cat toys all over the place and things knocked off tables and bookshelves.  He likes to suprise attack Ozzy, who doesn't seem to enjoy this little game and he eats and poop none-stop lol  He loves to bite softly when playing, which my toes are not enjoy at 2am. And he is very vocal, always making some noise or another and talking to the walls.

Ozzy and him are getting along slowly. They don't share beds or food, but they coexist in the same room without pissing one another...except when Busan jumps on her out of no where. I hope they become better friends in the future. Maybe once Busan calms himself down a bit (note to self : do not give him catnip..he will be high for 24hrs) 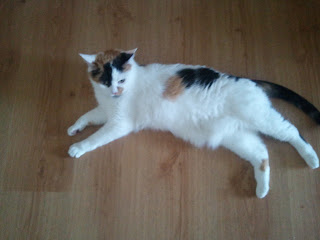 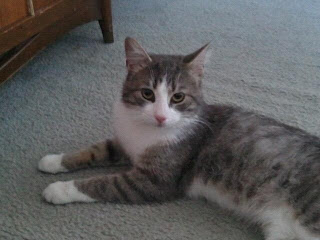 So there you have it.... Busan and Ozzy are now my babies <3

The results are in.


Well I haven't updated in a while and lots has happened since.
First, I finished my internship in SF After a year of learning my trade, I was officially done, and since SF was now the place where I wanted to establish myself, I got a job in another city.

At the end of May, I moved across the province, 5 hrs away from home and family, with the idea of starting my new job and my new future. I got to do the 1st part of my licensing exam, which was a practical exam (aka an embalming), I got the result as soon as I was done which was : PASS.

2 weeks after, I had to return to Sudbury for my 2 weeks review and part 2 and 3 of my licensing exams.
Meanwhile, we had a boursary dinner, where I won 2 boursaries, so that was nice. I got one for having the highest grades in the Northen Ontario and one for leadership after taking the initiative of doing a fund raiser for Japan's earthquake when I was in school.

Then at the of those 2 weeks, it was the moment that was going to decide my future. We had 2 days selected to write our exams. The first one was a multiple choice exam, which over 300 questions all raging from the History of Embalming to Biology, Law and Chemistry to Business and Psychologies. The second exam was a short answer exam with questions about our legistation and law of funeral services, a few forms and contracts to fill in. But for those, i had to wait for a few weeks before getting my results.

Then it was back to my new city, working while waiting for my results.

Well now i don't have to wait anymore, because I got them this morning. Sorry it's blurry...but I PASSED! all 3 exams, which means I am officially a license Funeral Director!

I have to admit, i cried when I saw it. All the stress of the last month, came out in the shape of tears. Then I called my mom right away.

I'm very happy and proud of myself. I always had trouble finishing things I started or sticking to it in a long term plan. I usually give up half way...but this time I stayed and made it through and I succeeded.

So the next thing I did was paint the second eye on my daruma. DAISEKO! 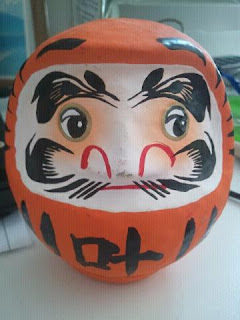