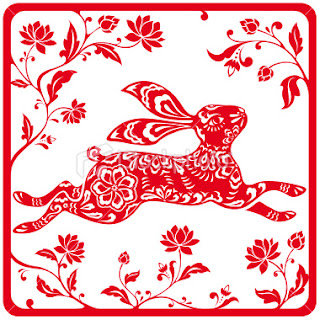 HAPPY CHINESE NEW YEAR EVERYONE!
Hope you all have a relaxing year!
"According to Chinese tradition, the Rabbit brings a year in which you can catch your breath and calm your nerves. It is a time for negotiation. Don't try to force issues, because if you do you will ultimately fail. To gain the greatest benefits from this time, focus on home, family, security, diplomacy, and your relationships with women and children. Make it a goal to create a safe, peaceful lifestyle, so you will be able to calmly deal with any problem that may arise."

It is the year where you wishes will come true!

For the past 5-8 years or so, people have started to be obsess with being "Eco friendly".
Therefore a new trend as started in the Funeral business; it's called "Green Funerals".
Although it is not highly popular in North America (slowly catching on), it was first really made public in the U.K.
With memorial parks sacredly guarded for green funeral purposes only.
A green funeral is usually considered being the best way to go for the environment; but that classify itself as being : No embalmings, no caskets, no preservation of cemetaries.

All that is very good. The embalming fluids we use in order to preserve, desinfect and restaur a body can be quite harmful...not only for the Director inhaling those fumes while embalming, but also after death, once the body has been placed to rest in the ground and starts decomposing, thus releasing the chemicals in our soils.
Now, let's not get into details about those heavily varnish and metal studded coffins that takes just as long to decompose and all the pesticides and herbicides used in order to keep the grass green back at the top on the earth in the cemetaries....
With time, all this will take a tole on the earth and the people, the livings, who are still going about their every day lives.

So most people will opt for the inceneration option...it's cheaper and better for the environment....or is it?

When a body is being incinerated, it releases more gas then anything else. Most of it comes from the body itself but also from the fossid fuels used in order to create such a powerful heat source...and that doesn't include the embalming fluids if the body had been embalm too.
Urns don't take as much places and most of them are made of materials that wont ever disintegrate, but really, why? Aren't ashes a natural thing that should return to the earth? "Ashes to ashes, dust to dust" So why prevent such a natural process?.
Beside most urns are no longer burried in the ground, but places in mausaleums (little appartements for urns).

So with a society obess about being Eco friendly, I say might as well be Eco friendly all the way, and that means 6 feet unders and beyond de graves.


But really, not that many people wants to be put in the ground wrapped up in a shrud...i understand that.

So that's when I came across a pamphlet about a company in Montreal that understands the terms of being Eco Friendly.

They make urns and (soon enough)  wooven caskets out of bamboo.
Bamboo is part of the grass family and it takes only 4 to 6 years to re-grow (faster then 50 to 150years).
It is renewable and must stable and harder then red oak or maple.
Also, it releases 35% more oxygene in the air and absorbe 8 times more CO2.

So you can be incinerated and placed in a Bamboo urn that will allow to return back into the earth safely with time. You can be burried in a wooven bamboo casket instead of just a shrud. 100% ecological.

How awesome is that? No more hard precious woods and metals or varnish and paints put in the ground.
I think it's pretty awesome!
And also the urns and casket are very pretty to look at . Helps save a few trees if you ask me!
Green Funerals has just gotten prettier. No more just puting the body in the ground. You can still have a casket, and one that wont harm the environment at that!

Now if we can find embalming fluids that wont harm the earth....

http://www.bamboocaskets.com/
Posted by Marie P.L at 3:15 PM No comments: