Here's a little retrospective into my 2010 year.

I got to celebrate 2010 with my family in Canada but a few days after the new year had started, i was on a plane going back to Japan.
I came back to Japan on January 3rd, ready to go back to work teaching kids and adults on the 4th.
Unfortunetly, this is not how you want to start the new year, but I started it with food poisoning.
For 4-5 days, i was home alone in a foreign country feeling like dying ahahah.

Afer that fiasco, my year started to be better.
I failed to find a job that would be willing to sponsor me to stay another year in Japan, and the stress started to get to me, so i made the decision to return to Canada.

But before that, I had to creat the best memories of my time there.
In March, i taught my last classes (with a big smile in my heart) and at the end of that month, My sister joined me in Japan for a month of adventure.

We left my little town of Oizumi in Gunma and took off for Tokyo for a few days, where we said our goodbyes to some friends and visited our favorit places (ikebukuro, Shinjuku, harajuku, Johnny's family club and shops...ect)

We then hopped on a nightbus with a Friend to F.T.O (Funky Town Osaka) to go see Yokoyama Yu's Solo concert (he is a member of Kanjani8, our favorit Japanese group). It was an amazing concert!
We visited F.T.O like tourist on the first 2 days because our friend had to go back to Gunma for work.
But what we mostly did, was to take pictures with every Biliken we would see ( a famous statue of a god in Osaka) and eat at every Takoyaki shops along the way (famous food of little doughballs with octopus in the middle).
Then it was down to myself and Cath.
We had 1 last month in Japan, and we weren't going to stay put.
We visited Osaka like locals. No more tourist stuff. We also visited the neighbourhood where our Guesthouse was at. Beautiful little town on the outskirt of  downtown Osaka (Banana house guesthouse, I highly recommend it) 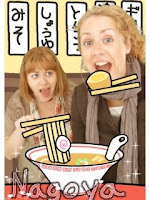 Then we had a 1 week unlimited train pass, so we took off every early morning and came back every late nighs. But we saw a lot.
We had one /half days visits to Kyoto, Himeji, Kobe, Nara, Nagoya, Fushimi Inari, Hiroshima, Miyajima, Kumamoto, Shimonoseki, ; and other places on the way, so we were able to go across Japan in one week.
It was truly amazing...and was I tired!!!
We visited tones of Castles, temples and onsens (public hot springs) Ate amazing foods (tried to eat the speciality of the region each time) Walked in the rain and under the hot sun for hours. It was great, we saw so much, we found new favorit places and realized some others we can just skip them next time ahah.

After spending nearly 2 and half weeks in the F.T.O region, we had just about 2 weeks left in Japan.
We we went back toward Tokyo, were we went to see Yokoyama Yu's solo concert once again, except this time it was better!!
We got front row seat. First first at the front, only inches from the stage. We did get noticed by Yoko and lots of jealous japanese fans lol During the MC, not only was this a first time having a special guest at his concert, but it was all of Kanjani8 standing on stage. We got noticed too mostly by Okura and Nishikido who were standing infront of us (stairing at the foreigners waving back at them). They sang all together, it was amazing and to top it all off, the concert ended with me catching one of the 3 autographed board that Yoko threw in the audience. What a good way to end my time in Japan, something I can hold on and recall all those great memories. 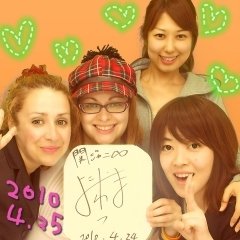 We met with Mamiko-san (an ex-student of mine) for dinner the next day with our friend Mayuko.
And a few days after that, we met up with Ayu-chan and left Tokio for good.
We went back toTakasaki (our favorit city, right after Osaka) visited the Daruma temple one last time and went to thank Oji-san for all the incredible hospitality he gave us everytime we went to visit his factory of Darumas.
Then we went on our way to Sosa, in chiba to spend out last few days with Ayu-chan's family. We visited Aizu, and learned about its history (the byakotai) and finally I said my goodbye a few days before my sister and returned to Canada at the beginning of May 2010.

On my return, I had a hard time finding work, so I spent most of my time doing nothing productive ahaha.
I got my driver's license (finally) a few weeks after my return.
On June 11, my sister and T-money got married. It was a quiet, secretive City hall wedding and the next day they had a surprise wedding BBQ reception at their house (where most people there had no idea they had just thought the knot)
At the end of June, I got my job back at the Learning center, teaching toddlers how to behave with other kids and use their motorskills. And I applied at two colleges in the Funeral Directing program.
In July, we had the pleasant visit of my favorit cousin and her twins. It made for a very busy summer. On August 1st, we celebrated my 26th birthday and the twins 6 birthday (their birthday is on the 3rd). We had a wonderful Pirate theme with a Piniata and lots of cakes.
I got accepted in both college in mid-August. But chose to go to College Boreal in Sudbury because the program was given in French (and classes were smaller)

In September, I started my first day as a College Student.  I started my classes for my funeral directing program and every day ended up loving it more and more.
At the end of September, I got the great news that I was going to be an Aunt for the first time.
Unfortunetly, at the around Thanksgiving (October) , we learned that my sister had a misscarriage.

I finished my first term with my lowest average being 81% in Biology and highest average of 90% in Embaulming, not bad for someone who hadn't been in school for over 8 years.

And I just spended the quietest Christmas holiday with my family while eating lots of food and doing a marathon of Criminal Minds.
Oh and just like I started the year, I ended it wih another food poisoning ahaha.

Today is December 31st 2010.
When I look back at this year, I have a hard time to imagine that I spend half of this year in Japan and the other half on school benches. It wasn't a wild Year, but it was filled with lots of Major events.
Sad and Good events, Surprises and Deceptions, in overall it was a good year.

I miss Japan terribly and wishes everyday to be there again, but at the same time, I know that I made the best choice to come back to Canada and specially go back to school.
I love my program, and I am looking forward to my future. So many possibilities ahead of me.
So I am looking forward to 2011.
Starting my second term on Janury 4th, and my intership in May. Hopfully, I will be back in Barrie for my intership where I will be able to save up money so that hopefully in 2 and half years I can put a down payment on a house. Oh the excitement...but let's start with 2011 and lets aim higher grades in my program. 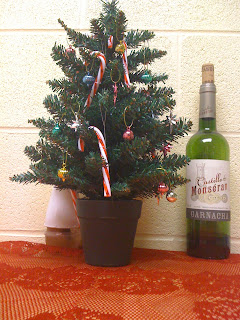 Mini Christmas tree and cheap (almost empty) bottle of wine.
Today is December 5th, meaning that Christmas is in 20 days (or 19 for those like me who celebrate on X-mas eve)
I'm ready for Christmas.
I bought a tree at the dollarama for 2$ and the mini ornaments for 2$, so my 4$ christmas tree is the center piece on my table in my residence.
Everytime I walk in my unit, i see it and it makes me smile. Because I do a countdown to how many days before the holdays. (10 days as of today!!)
I even made a Jpop X-mas/Winter playlist and it's on repeat every time I am sitting at my desk (like right now, I Wish by Kanjani8 is playing)
Today, I was an "elf" at the Teacher's kids x-mas party.
doing craft with the kids and handing out presents with Santa.
It was fun, got free food and a gift card for Subway restaurant.
But
I can't wait to go back home.
And it's not like we are doing anything special. I guess this year, I have learned to love and appreciate my family even more.
Last year, I was living in Japan, and I didn't miss them all that much (on the odd times i did) but this year, i'm only 3hrs away and I miss them everyday.
I guess with everything that has happened in the past few months....
So I am looking forward on finishing my 1st term in my program.
I have 5 exams and 1 projet to do before then.
I love my program...but at the same time I am looking forward on finishing it too.
I want to work!
(and make money to pay off my debts and credit card lol)
Now that I am finishing the 1st step toward my future, I am starting to see a little bit more ahead.
I'm already thinking about the house I want to buy in 2-3yrs.
Where to settle and the likes.
Now everything is possible and in 6 months it will be even more and in 18 months even more....
I'm looking forward to my future because I am doing something I enjoy.
It's a great feeling....but as of right now, I need to face those 5 exams ahaha
Biology, Embalming Theory, Embalming Lab, Orientation in Funeral Services and Law and Ethics.
One at the time!
But I'm ready for the Holidays now!
I need a break with my family.
Maybe even go skiing with them?
ahaha ok, let's not get carried away.
I'll sit in the cottage while they ski lol
10 more days!﻿
What are your plans for Christmas?
Posted by Marie P.L at 3:30 PM No comments:

I decided to make a new blog, but i'm not replacing my old one yet.
Basically, I decided to use my private Livejournal to keep up with the fandom and Japanese news.
I'm not posting all that much there anymore.

But I am to use this in order to post about my every day life.
I guess on a more vague level for my friends and family to read.
Nothing special.

I haven't decided yet what I want my blog to be about.

But right now, I think it will be mostly about my days back in College studying Funeral Directing, and Dreams.

I can't talk too much in details about what we do in Funeral directing, but some aspects are O.K to talk about.

and I have lots of crazy dreams. I try to write them down first thing in the morning while they are still fresh in my head.

P.S When I went to register on this site, it said I already had an account with my email. So I went to have a look and did a password reset...and yeah, someone had made a blog with my email without me knowing...crazy! So i resetted the password and deleted everything (after that's MY email), also the blog was all in Portugese and the person hadn't posted in like 3 years anyways...but yeah...crazy!
Posted by Marie P.L at 9:08 PM 4 comments: