Finding a place to do my internship has proven to be more difficult then I thought.
The problem I realized was that my school, still being fairly new, is not yet known in the industry.
So when people see "College Boréal - Funeral Directing" they go "wwwhhhhaaatttt"
In ontario there are only 2 school giving that program : my school and Humber in Toronto.
My school is in french, Humber is in English.
the french school for my program that people normally go for is the one in Montréal.

Over the past month, I had been sending my résumé to over 35 Funeral homes in the GTA region and beyond and half of them came back to me with either "we are not taking interns this year" or " we already have our interns for the year". or simply, no replies at all. (only three wished me good luck in finding a place, and 2 welcomed me to this business, and 1 said they were going to keep my résumé for the future).

I'm the only one in my class who is also from the Toronto region, everyone else, are from the Ottawa region or Québec. and out of 13 students, 9 secured their internship. So I was starting to worry.

With all that, on thursday, our teacher informed us that he received an email from a funeral home in the region of Ottawa looking for interns. Quickly I sent my résumé over and not even 30 miniutes later, I got a reply back saying they were interested on speaking with me and they would get back to me.
The next day, I received a phone call from them and we engaged into a phone interview.
45 minutes later, we made plans for a face-to-face interview over my march break.
They seemed to really like me :-)

So on march 1st (tuesday) I will be meeting with them, and hopefully securing the intern post with them.
The funeral home is only at 30 minutes away from my cousin's house, so if all goes well, I will be staying with her over the spend of my internship.

I'm very excited about this!
Sure I would have loved to stay closer to home, but Ottawa isn't so bad. I know people there.
I am a bit nervous because I have to wait another moth before I know for sure if i have the post.
I also know, that another guy in my program sent his résumé there, so technically he's my rival.
But between you and I.....I have better chances then him ahahah

but eventhough...i'm keeping my finger crossed...please keep yours crossed too!

Now I will leave you with some wicked Hursts (corbillard) 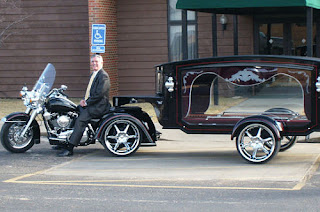 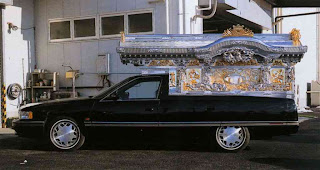 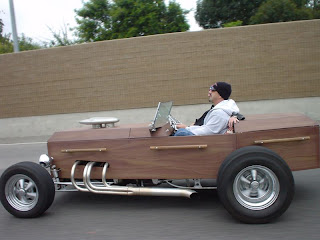 ok it's not a hurst, but the guy turned the coffin into a car ahahaha 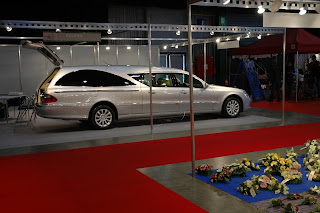 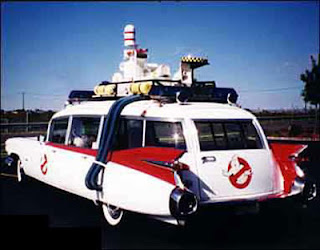 I'm afraid of no ghost...as a funeral director you can't be! 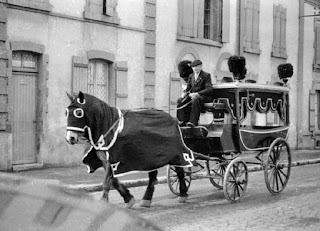 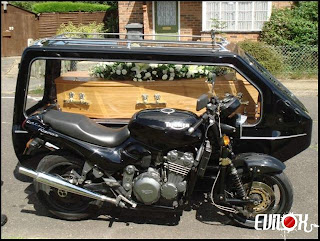 another variation for the bikers
Posted by Marie P.L at 1:44 PM 2 comments:

If you were stuck on a deserted island for the rest of your life....

What mix-CD would you bring (15 songs total).


and why do you choose those songs (remember, these are the last 15 songs you will be listening to for the rest of your life!)

P.S this is a project i have to do for one of my class (music through the ages) and I only have 13 songs picked and i keep changing them lol

but i was wondering what you guys might pick.
Posted by Marie P.L at 8:14 AM 2 comments:

Tomorrow will be the start to my second semester into my program.
Above you can see the marks I got for the first semester...not bad eh?
I have to admit that I am very proud of myself, then again, there is nothing else to do in Residence but to study (or party..but I don't party).
I'm actually very surprised by my 90% mark....I was very stressing out about the final exam in that class, mainly because I had realized (once i have turned my exam in) that I had made a  huge mistake in the question that was worth the most point. I guess I must have done well on the rest of the exam and throughout the year.
The last 3 classes on that list, were more like general classes, so I admit I didn't really focus all that much on them, but I didn't do too bad either.
I'm not surprised with my biology mark, the exam was extremly difficult. It was all multiple choices but 80% of the exam's questions were about things we hadn't learned (or told by the teacher to "not worry it wont be on the final exam") So i was expecting a lower mark.

Tomorrow is a half day.
We will all be meeting in our "homeroom" classes for registrations and to have a little talk about what's ahead of us.
Then Wednesday is the first day of class.

So i start my days at 8:30am and usually finish at 1:30pm. The reason for that, is we are "on call"  for practical embalmings (labs). The class is divided into 4 groups, so each day, a different group is on call to go in a funeral home and do an embalming.
Monday is my biggest day!!!
We have to pick an extra class of choice (the choices were : Sexuality, Being Franco-Ontarien or Music through the ages) I picked the music class since I have somewhat a background in music (Musical performing, which was a big part of the 1940-1950's) and I also thought that i needed a fun class for my Monday and the 2 other classes offered weren't gonna cut it lol.

I guess i\ll be making *Bento boxes on sunday night!!!!

I'm looking forward to this semester. Only 4 months left of school work and then I can go back home and start my 1 year intership. **Ganbarimasu!!!

Side note: During the holiday, I received a letter from the Dean of Health and Science department, congradulating me on my high marks. It was a letter of "High recognitions for being in the top of my program"...i'm such a keener! ahaha